Psych. It’s totally not, and here’s why: Because if simply riding a bike were as easy as riding a bike, buying one wouldn’t come with instructions. Stay with me; I’ll get to my point eventually and add this final thought for your consideration — God save the novice bicyclist living in a hilly neighborhood.

Anyway. I’ve decided the best way to do this is to get it right out there, for two reasons: 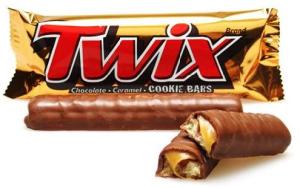 Twix break! I'll have you back to your regularly scheduled blog reading in just a moment.

Take two. Like pulling off a Band-Aid. One that blatantly rips off layers of protective skin in agony to reveal warm, endearing childlike wonder. Certainly not age-inappropriate, slightly creepy immaturity.

My parents bought me a bike a few weeks ago. Now before you go all “Awwww, how adorable” on me, let me say this one last thing:

Yes, I have a big-girl job. Sure, I’ve jammed out to Independant Woman by Destiny’s Child a time or two in my day. I even buy my own groceries…most of the time. And I have my own apartment, abeit, I also have a cat. ONE cat. No, I am not a spinster, nor do I feel the need to defend myself. Yet.

Anyway. I was so excited because it came out of the blue. I didn’t even know I WANTED a bike until we were sitting at dinner one evening and they offered to buy me one, at which point I broke into a sweat and was filled with a desperate need to acquire one IMMEDIATELY. I may have even held out my hands and made simultaneous grabby motions in the air in front of me like a five-year-old reaching for a cookie. And I wonder why those job interviews aren’t just rollin

You mean you’re NOT supposed to ask when daily corporate nap time takes place during a job interview?

Unfortunately, this moment also led to an instant of misplaced self-discovery.

I’M THE FAVORITE!!!! (Brother, if you’re reading this blog, I’m sorry you had to find out like this. And the fact that our parents repeatedly say they love us equally or that they bought me a bike because years ago, they bought you a bike (or even that your bike was more expensive), is not relevant in this self-discovery. Obviously. Hugs-n-love!)

My thoughts were racing a mile a minute (as I would soon be racing on my new bike) as I envisioned picnics in the park, riding along dusty, beaten trails, barreling one-handed down a kid-filled street as I waved to neighbors and they waved back, smiling happily at my newfound freedom). I was instantly filled with a sense of adventure and fulfillment.

However, that sense didn’t last long enough to go out of my way and (sensibly) research bikes or to really have any sort of opinion on the matter whatsoever.

That’s how we ended up at Wal-Mart. And wouldn’t you know it that while wobbly testing out a few bikes, I would run into pretty much every professional coworker I knew, thus forever sealing my reputation as a woman-child (Eh, I’m cool with it).

My favorite run-in was quite literal and with with an old, frowning man who blatantly disapproved of my racing down the aisles and skidding to unforseen sloppy stops. I think his exact words were, “What do you think you’re doing?!”

Uh, shopping, man. And totally owning it, if I said so myself. Which I did. Under my breath. He was kind of terrifying.

I tested out two bikes before my attention span rapidly dwindled and I wanted to get the hell out of Dodge. I went with the baby blue and white one. I had no idea what brand it was, but sadly, that’s also not the saddest part. No, the saddest part came when I realized that there were bike accessories. The bike was instantly old news. Can you guess which one I zeroed in on? Was it: 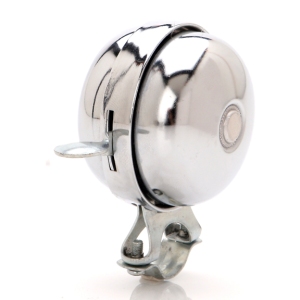 It's not how I envisioned stopping traffic as a grown woman, but it'll hafta do.

Ding, ding, ding! If you guessed the old-school bell, you win…well, nothing. But if you feel pride, then by all means, you scoop that pride up and never let it go. My gift to you.

As I was wheeling my new toy up to the cashier, I noticed something taped to the spokes of the front wheel and discovered it was clearly labeled “Instructions.” Although I haven’t read them yet, I’m desperately hoping they say something like this:

How to ride a bike
It’s as easy as riding a bike!

Did I say the saddest part was enjoying my bell more than the bike? I was still wrong.

In actuality, the saddest part came as my dad and I were waiting in line for the cashier. I noticed a friend in line ahead of me, and as I excitedly yelled at him to check out my bike, his first words upon recognizing me were:

“Oh, I didn’t recognize you. I thought you were a 10-year-old buying her first bike with her dad.”

Except that I was still in my formal work outfit. And he’s known me for years. And I’m 26.

I decided not to show him my bell.

So everything would normally be great now, except the bike is still at my parents’ house because I haven’t had “time” to grab it and ride it the two blocks back to my place yet. And also, who knew riding a bike by yourself wouldn’t be very fun?

Oh, yeah. Everyone but me.

Maybe I just need to buy more accessories to stay interested. Maybe the bike and I will just be great friends who have picnics in the garage while we (I) talk about our (my) day(s). Maybe that’s why many things can not be said as being as easy as riding a bike.

Such as riding a bike.