“You always get a special kick on opening day, no matter how many you go through. You look forward to it like a birthday party when you’re a kid. You think something wonderful is going to happen.” – JOE DIMAGGIO

From hearing cricket(s)…to playing it!

Growing up, I attended a host of Catholic schools and was subliminally taught that conformity results in a well-rounded education, an unwavering relationship with God, and overall, an obedient, reverent and respectful young adult.

Just writing that first sentence made me completely lose my train of thought as to how this all relates to dart league, and not just because I was busy temporarily dry heaving at the memory. I will never be able to look at a crisply ironed Oxford shirt and khaki pants/shorts the same way.

Seriously. Where was I?

Oh yeah. Afterschool activities. Those organizations we were required to participate in to enhance our accomplishments and special talents in order to get into a solid university. Also cleverly designed to keep kids from coming

home until after dark, much to delight of every harried parent.

The most popular kids at my local high school took to the field with soccer and football, hitting the gym every winter for volleyball and basketball.

I was in softball and track. Where they had a captive audience of adoring parents, coaches, teachers and screaming groupies, I had 5 a.m. weekend workouts and shin splints. It seemed like a fair trade for not selling out my virtue and precious time spent watching TGIF on Friday nights (OMG, TOPANGA!) for drinking at the canal and attending unsupervised parties. At least that’s what I kept telling myself. Thanks for destroying my life, Melissa Joan Hart.

I was also part of the National Honor Society, FBLA, Teens for Life, Yearbook and Art Club, and may be subconsciously withholding a few more clubs from my memory ’cause hey – no need to get it all out there in one blog post, right?

(Those of you thinking, She sounds like the type of person who had lots of hamsters as a teenager, I smugly regret to inform you that you’re wrong! Dead wrong! It was a guinea pig. Cinnamon was one long-haired, vitamin C-deprived cutie who loved Tang. Gosh, she loved her Tang.)

Back to modern day.

Last summer, it came to my attention I urgently needed to join some sort of after work activity as a last ditch effort to save my social life, which was at the time notorious for catching a z or two. After coed softball concluded in the fall, dart league was the next natural choice – it was a win-win encompassing all the nostalgia and fellowship of organized sports with none of the orthodoxy. Plus, you can swear without being reprimanded and forced to run a lap, which I could really hop on board with.

Still, where others were playing intramural “Power” volleyball (as opposed to “Play,” featuring the league’s more relaxed teams whom I’m guessing can’t as easily spike, I mean, strike fear into the hearts of their opponents) at my old high school, those of us in dart league veered toward the wilder, darker side of life. A side that never includes enough of the Real McCoy’s “Another Night.”

It didn’t hurt that we got free T-shirts featuring an image of a fishbowl and fishing poles with the caption, “Fishin’ in the dark.” If that wasn’t ironic foreshadowing for our first-year dart team to play against teams of  5+ years, I don’t know what is. The added irony is that we’re still wearing a uniform.

My team of four travels from bar to bar throughout town every Monday night, throwing against various players who – from the chained wallets and bearded, to the middle-aged married men with two kids who have this night, alone, to leave the house for a few hours, to the overly-enthusiastic, husky women who dance and sing a bit too freely to all of today’s top hits – are always simply aspiring to have a good time.

Perks of dart league: we get one gratuitous beverage per week! Two if you get a hat trick, which means throwing three bulls eyes in a row. I just found this tidbit of info out last Monday. If I had known before, I probably would have been trying harder, what with the tough economy and tight budget and all.

…Yup. That’s why I wasn’t throwing hat tricks before.

The real trick is to not suck.

Anyway, joining the league last October was a breath of fresh air, and not just because the bars in my town are finally smoke-free. No, rather, it was because I finally had something to look forward to on those Mondays when getting out of bed to start yet another week of writing the corporate news, revising formalcommunication plans and hearing the word “robust” thrown out, well, robustly, seemed unbearable.

The league lasts until April and I only hope my attention span makes it through the winter with the same gritty determination. Looking back over the last few months, I made the connection that each of my favorite memories of the league thus far have one common theme: free. How’s that for budgeting while enjoying myself and participating in a healthy dose of social activity? To throw (heh) a few out here, some of my favorite memories include:

1. Showing up in matching T-shirts and equally cheesy positivity to a dank dive bar brimming with scowling bikers, eternal alcoholics and other seedy characters. Interrupting a long sequence of scream-o music with Brittney Spears. Dancing freely in seated position without making direct eye contact with bar patrons for remainder of the night.

2. Christy and I utterly schooling two guys, who clearly knew about the hat trick (AKA free drink) rule, in less than five minutes flat. Ah, the power of a Catholic education. Cue angels singing as the clouds part.

3. Christy and I immediately losing to aforementioned team in a  rematch due to the insistent 40-something male intent on holding a grudge from getting a free education. (The damage to his ego, however, was apparently costly.) 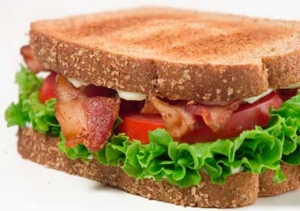 It's like a BLT, but with less lettuce and more death wish!

4. Taking home free-for-all produce laying out at yet another sketchy bar and making the most delicious BETs (bacon, egg and tomato). Thank you, naïve trust established from 26 years living in a rural community.

5. Freeing our minds by making poor life decisions and closing down the bar each week:

Clayton: “Just one more drink?”
Me: “One more.  I have an important meeting tomorrow morning.”
Clayton: “Me too. So one more and then we’re going home.”
Me: “Yes. For sure.”
Clayton: “Deal.”
Me: “Definitely.”